Berlin – the vibrant, multicultural, scientific, artistic and technological capital city of Germany has been of a great interest to me for quite some time! Driven by purely conventional touristic motives at first, I had been considering various possibilities of seeing this supposedly attractive destination. Yet, as the months (or, more precisely, the years) were passing by, another type of motivation had gradually taken over my desire for visiting Berlin – my progressively increasing interest in the relatively recent communist past of Central and Eastern Europe, together with the historical topic of the Cold War. Luckily, in February 2020 – around 30 years after the fall of the Berlin Wall (and at the dawn of another uncertain period in terms of traveling and freedom of movement), I was finally given the chance to experience and capture the atmosphere of East Berlin – the once glamorous, state-of-the-art, model socialist capital of the German Democratic Republic!

The idea of a photography project, that would later be entitled “Ost Berlin 1988/2020”, had emerged sometime around the summer of 2019 – months before the 2020 trip to Berlin was even considered! It was all triggered by a completely accidental encounter inside a former military base on the outskirts of Aytos. As my cousin Manol Z. Manolov and I were exploring the nearly-abandoned site (looking for some nice urbex shots and enjoying the peaceful and nostalgic atmosphere of the once vigorous socialist military unit), we came across Oncho Onchev – a retired military man, whose job now was to secure the essentially empty base (except for greenery and wildlife). And what at first seemed like a potentially troublesome confrontation, actually turned out into an inspiring friendship! Equally surprised by our presence inside the base, Oncho seemed quite curious about us and, thanks the positive attitude of both sides, it didn’t take long before the three of us were sitting next to the base’s main entrance, initiating various interesting conversations! Provoked by the environment, most of the discussions were, of course, associated with Oncho’s military past, as well as with his insight on the pros and cons of the former communist regime that reigned in Bulgaria for more than 45 years. As time was passing by, though, additional topics were brought up, including the inevitable talk about traveling and photography (two of our most beloved subjects).

And this is when Oncho had both of us so pleasantly surprised! Intrigued by our enthusiasm for visiting and photographing different places around the world, he had decided to share a story that we would find particularly exciting. It turned out that Oncho (together with his wife) had done quite an impressive trip to East Berlin, back in 1988 (before the fall of the Wall)! What made the story even more appealing to us was the fact that the couple traveled the appreciable distance of 2000 km (one-way) in their red VAZ-2101 (a.k.a “Zhiguli”). Inspired by our obvious excitement, Oncho did his best to remember and share as many details as possible, what made his presentation particularly vivid! The culmination was definitely something that none of us had expected at all – the red Zhiguli, the very same one that Oncho drove to East Berlin and back to Aytos more than 30 years ago, was right there – sheltered inside one of the buildings in the base!

The exhibition of the red Zhiguli had a strong inspirational effect on Manol and I, resulting in quite an exciting photography session of the Soviet vehicle, together with its owner standing by. However, we still had absolutely no clue about the next revelation that Oncho had prepared for us! Being a keen photographer on his own, Oncho had a couple of already developed black and white rolls of 35mm film (ORWO, not surprisingly) depicting the 1988 trip to East Berlin, still kept at home. These rolls and, of course, Oncho’s willingness to share them with us (for which we are sincerely grateful), were essential for the inspiration and realization of my future “Ost Berlin 1988/2020” photography project!

The concept of my future photography project became perfectly clear from the very first moment I saw Oncho’s negatives – I wanted to recreate one of his rolls from East Berlin as accurately as possible! Now, many would say that such a “vintage” photography endeavor is nothing extraordinary to plan and execute, especially if the city of interest is called Berlin! …And they wouldn’t be wrong – finding old photographs, depicting a city as famous as Berlin, and obtaining vital information associated with the photographed sites/objects is not a difficult thing to do at all! However, what made the whole concept so special for me in this case was the fact that I actually knew the person whose frames I was about to recreate! Moreover, Oncho captured East Berlin in quite specific geopolitical circumstances that took place just a couple of decades ago. In this regard I considered my future photography project as a bridge, connecting two not so distant, yet quite contrasting periods of Europe’s turbulent history; as a chance to travel back in time, seeking to experience the atmosphere of East Berlin exactly the same way as Oncho did; as a source of information stimulating the observer to contemplate on how had life changed after the Wall came down more than 30 years ago (quite abstract and subjective, of course)! In order to make the whole perception as realistic as possible, I decided that my film camera was to be used for the execution of the recreation process. And guess what type of film I was about to shoot..? That’s right – ORWO NP22 (“Made in GDR”) – the very same one that Oncho had inside his camera back in 1988!

The successful realization of my forthcoming project required me to scan and thoroughly analyze Oncho’s frames in advance. While doing so, I quickly realized that Oncho’s single “East Berlin” roll had been dedicated on capturing just two main locations – a number of different sites in the vicinity of Alexanderplatz (one of the most famous and central area of nowadays Berlin), and a couple of historical building around Sanssouci Park  – a popular destination located close to the neighbor city of Potsdam. Considering the remoteness of the latter and the relatively short duration of our already scheduled trip, it was quite clear that my recreation effort would be focused entirely on the first half of Oncho’s “East Berlin” roll – namely, on the Alexanderplatz photographs. And so, there were a total of 14 frames whose exact location and angle of shooting I had to figure out – a process that was accomplished much faster than I expected (long live Google Street View)! Marking the precise spots on my offline Berlin map, uploading the original Oncho’s frames on my phone, and retrieving a couple of ORWO NP22 rolls for my film camera were some of the final “Ost Berlin 1988/2020” preparation steps.

February 2020, Berlin. Having already spent three totally intensive days, the time for my long-awaited photography project had finally come! It was a windy, relatively cold, but fortunately dry winter morning. After the usual breakfast took place, I headed out towards the nearby “Ostbahnhof” train station accompanied by my brother Branimir who, being quite interested in my photography endeavor from the very beginning, wanted to join, observe and even take part in the recreation process! Indeed, considering the multi-device nature of the project (I had to simultaneously operate my phone for observing Oncho’s original frames, my film camera for taking the recreation images, and last but not least – my digital camera for backup shots in color), Branimir’s assistance was extremely helpful!

Thanks to the rather detailed preliminary preparation, it was relatively easy to find the spots where all 14 frames were originally captured by Oncho 32 years ago. Still, determining the precise adjustments took some time and effort, which, combined with the deteriorating weather conditions, resulted in our hands feeling almost completely numb! The emotional and uncertain nature of the project, however, kept our spirits up during the whole more-than-two-hours-long endeavor. Each new spot was anticipated with such a great levels of interest and curiosity – we could barely wait for the next frame to come and observe how or if the scenery had altered after the passage of more than three decades. Some places didn’t change at all (the TV tower), others were practically inaccessible the way Oncho approached them (the State Council), third were not there anymore (the infamous Palace of the Republic). But whatever the case was, I treated each new frame as a separate story, bringing along its own energy and specific mood; as a mixture of different eras, encapsulated in a silver band of light-sensitive material; or even maybe as a ‘parallel universe’ perspective of Oncho’s trip to East Berlin, proving how deceiving our perception of time might actually be! 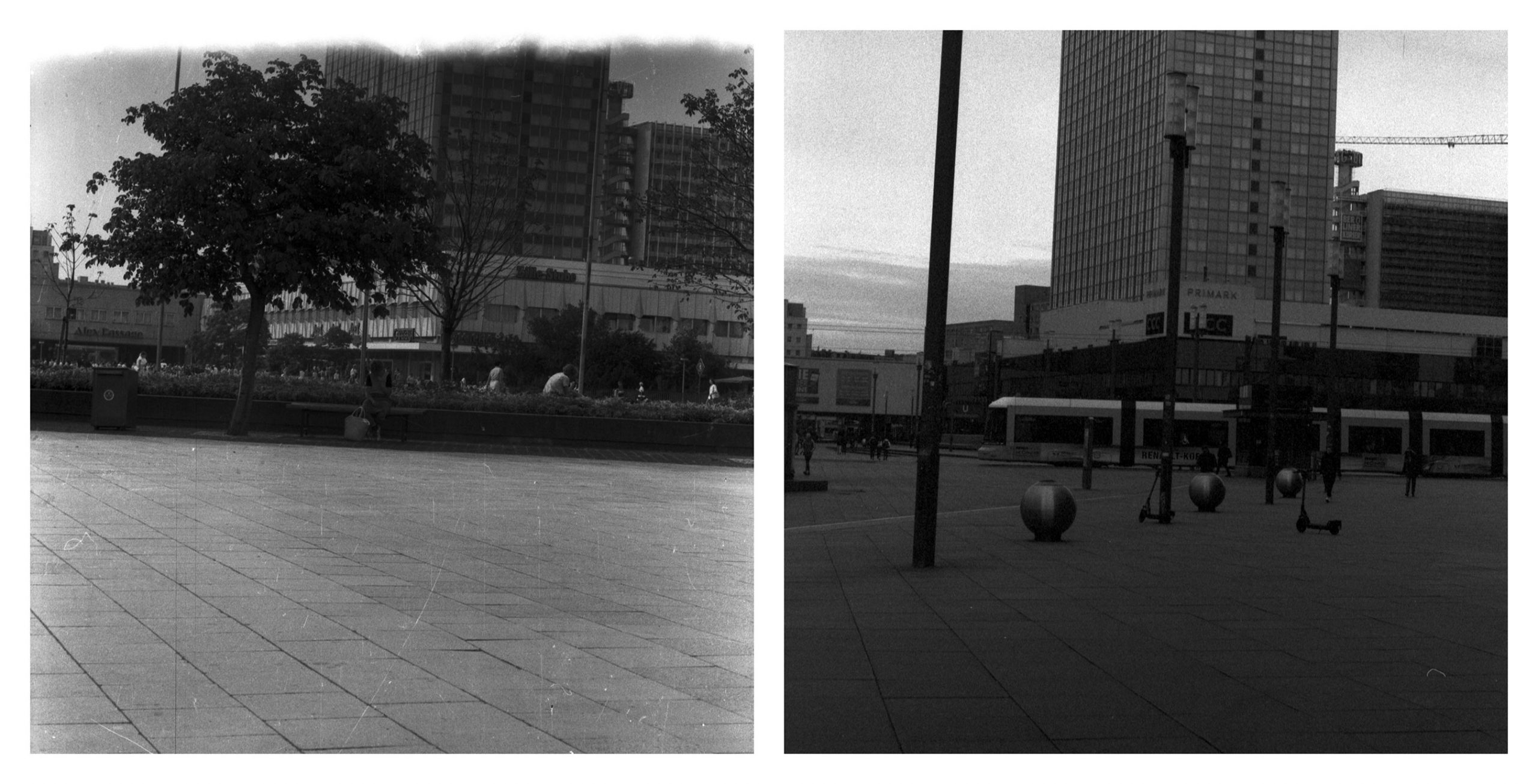 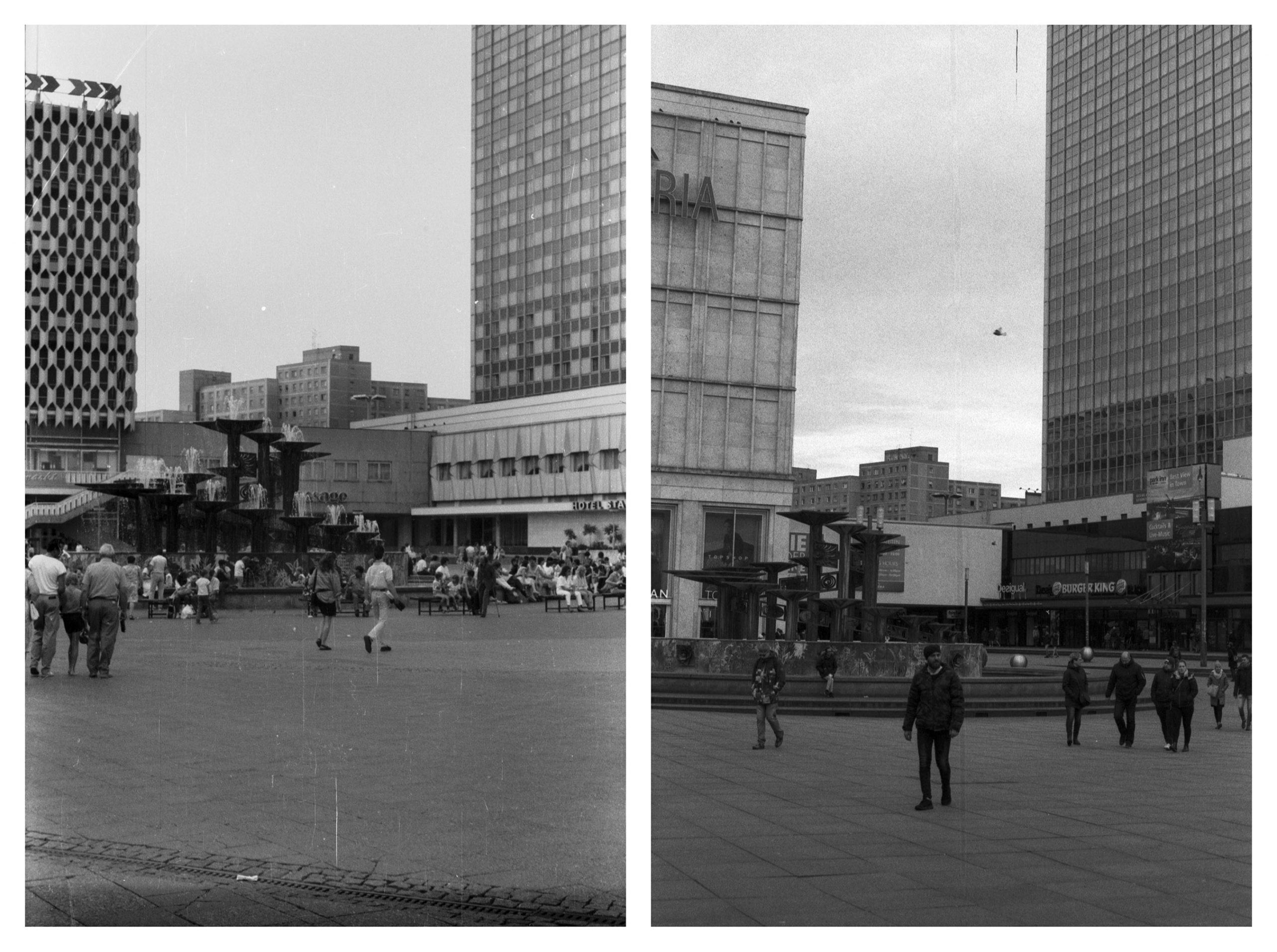 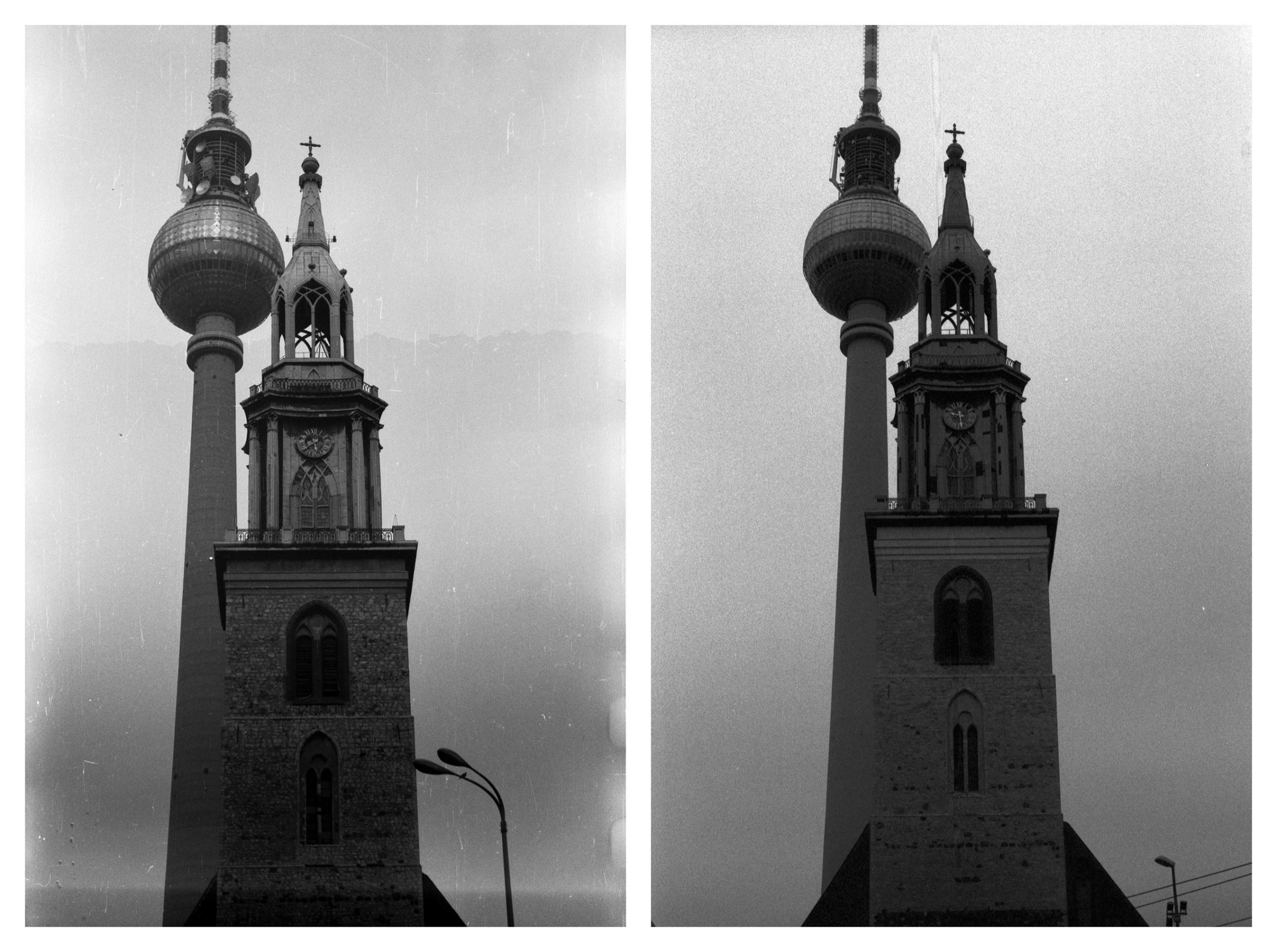 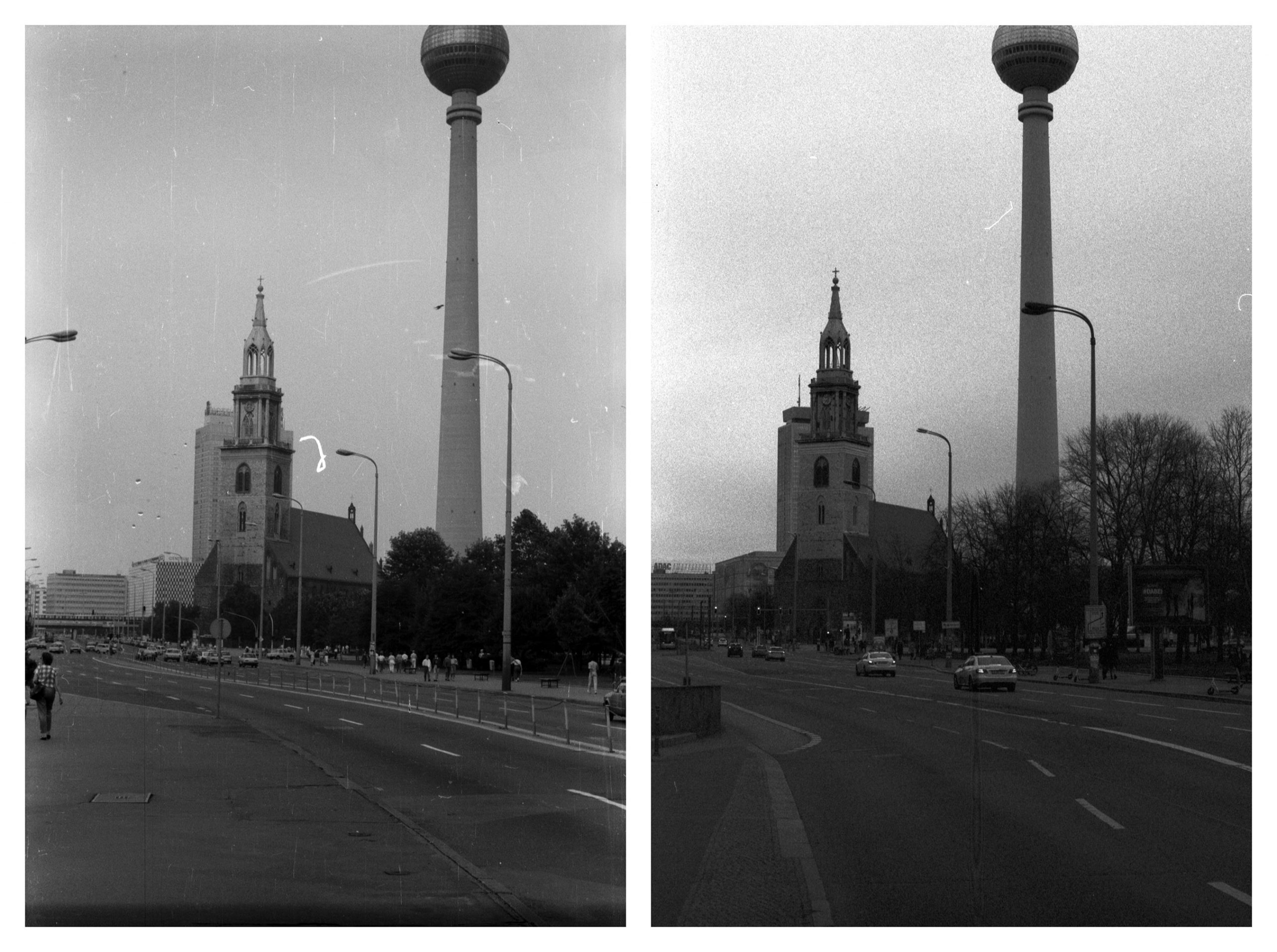 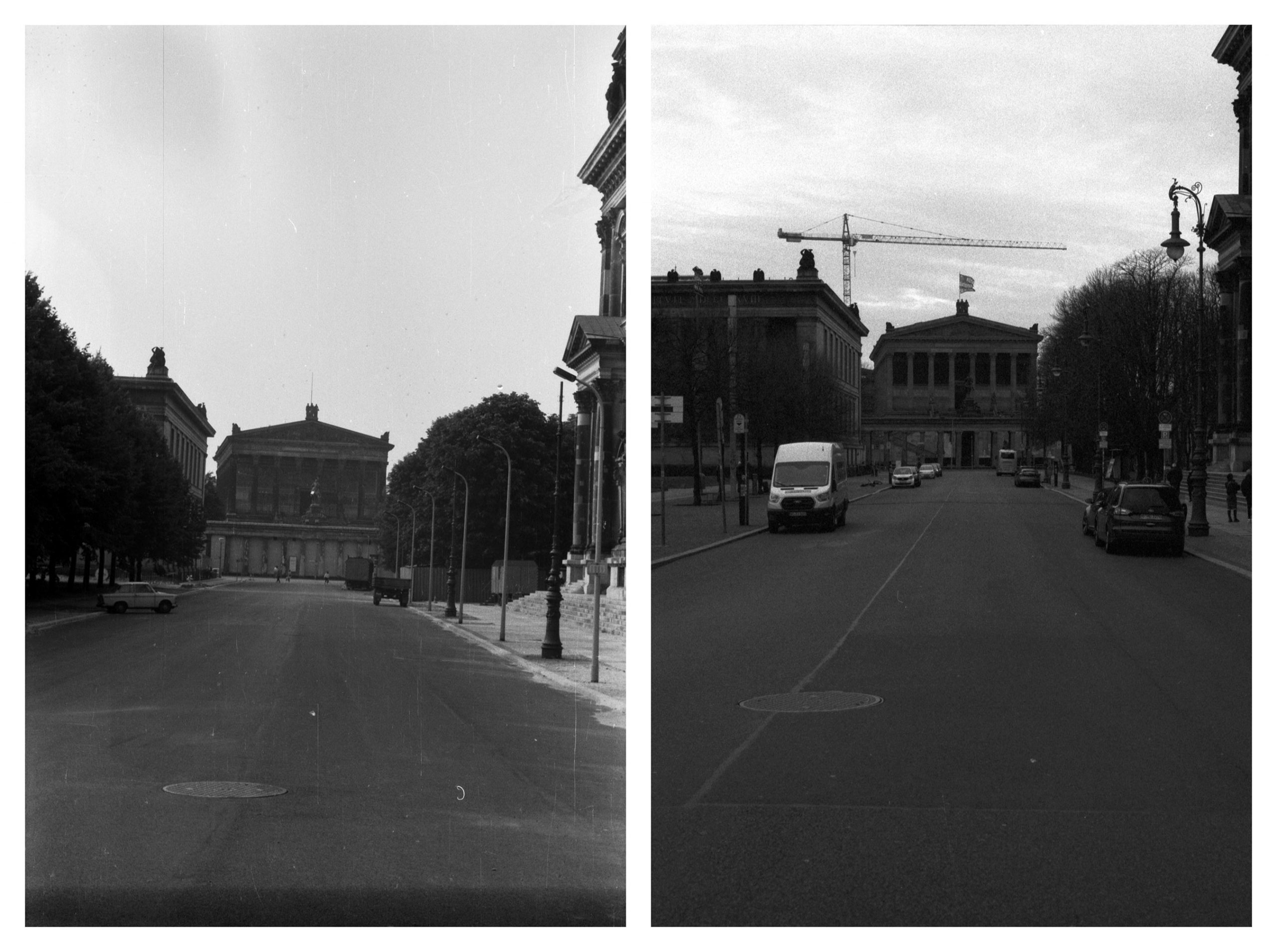 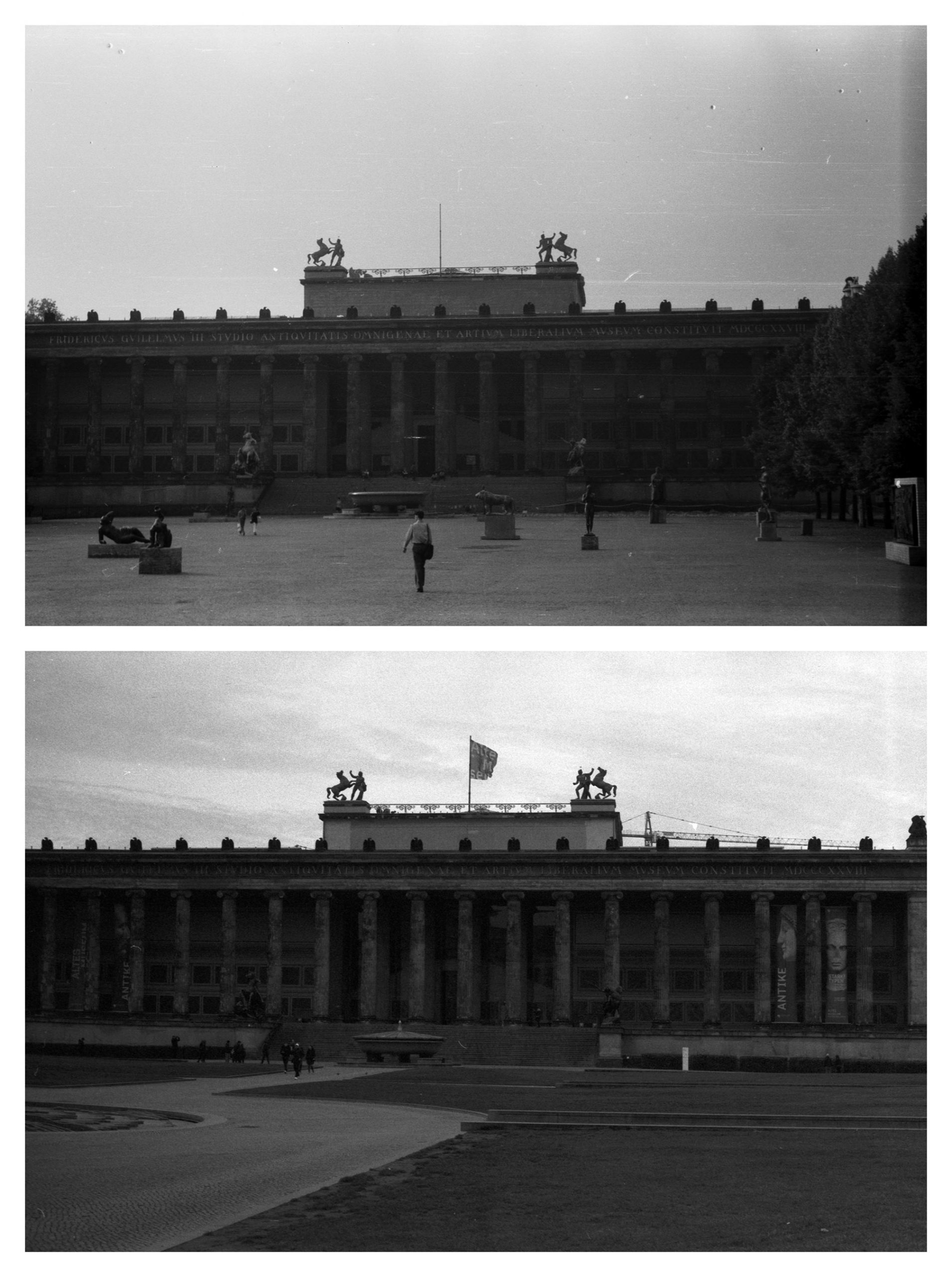 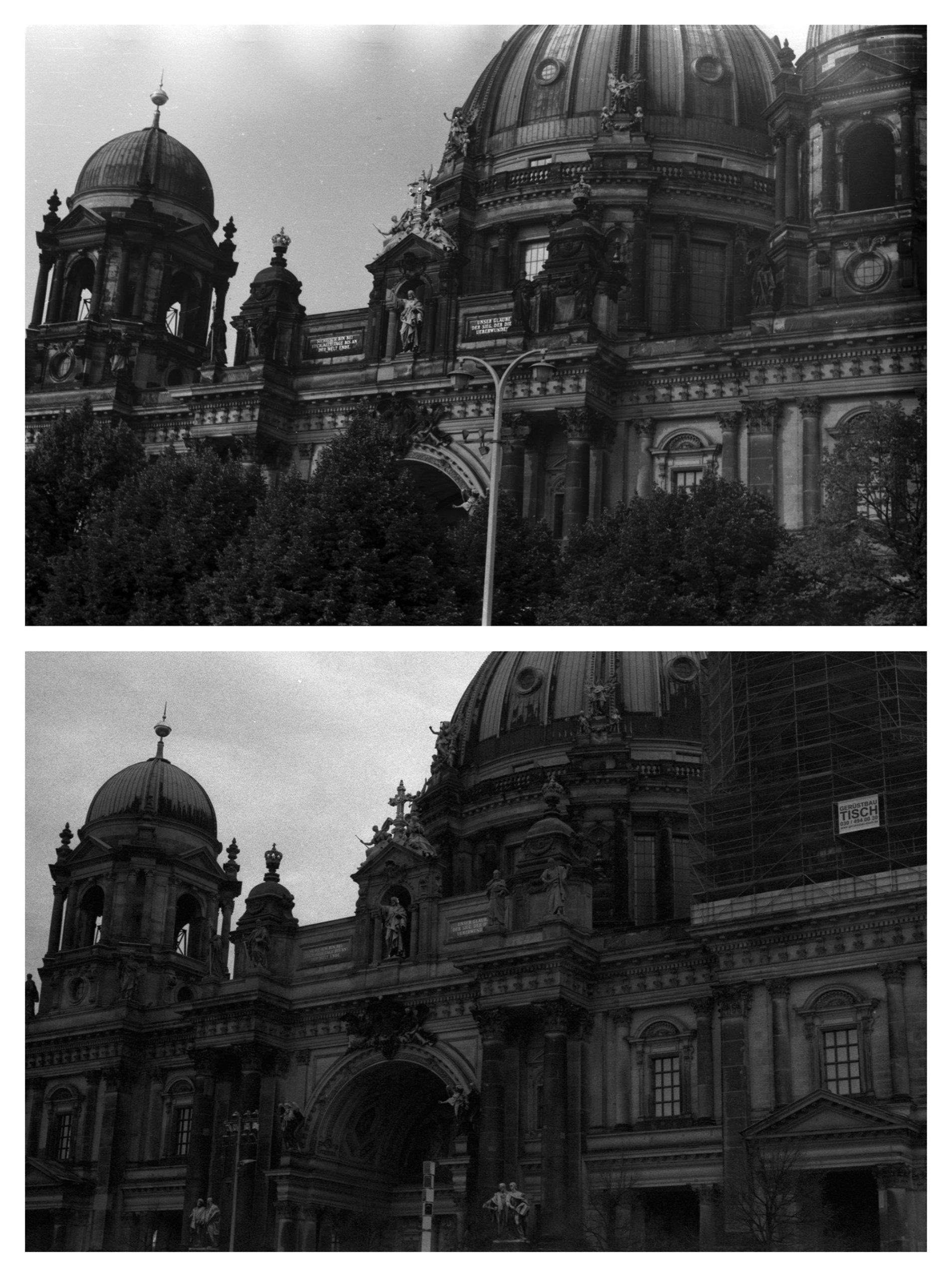 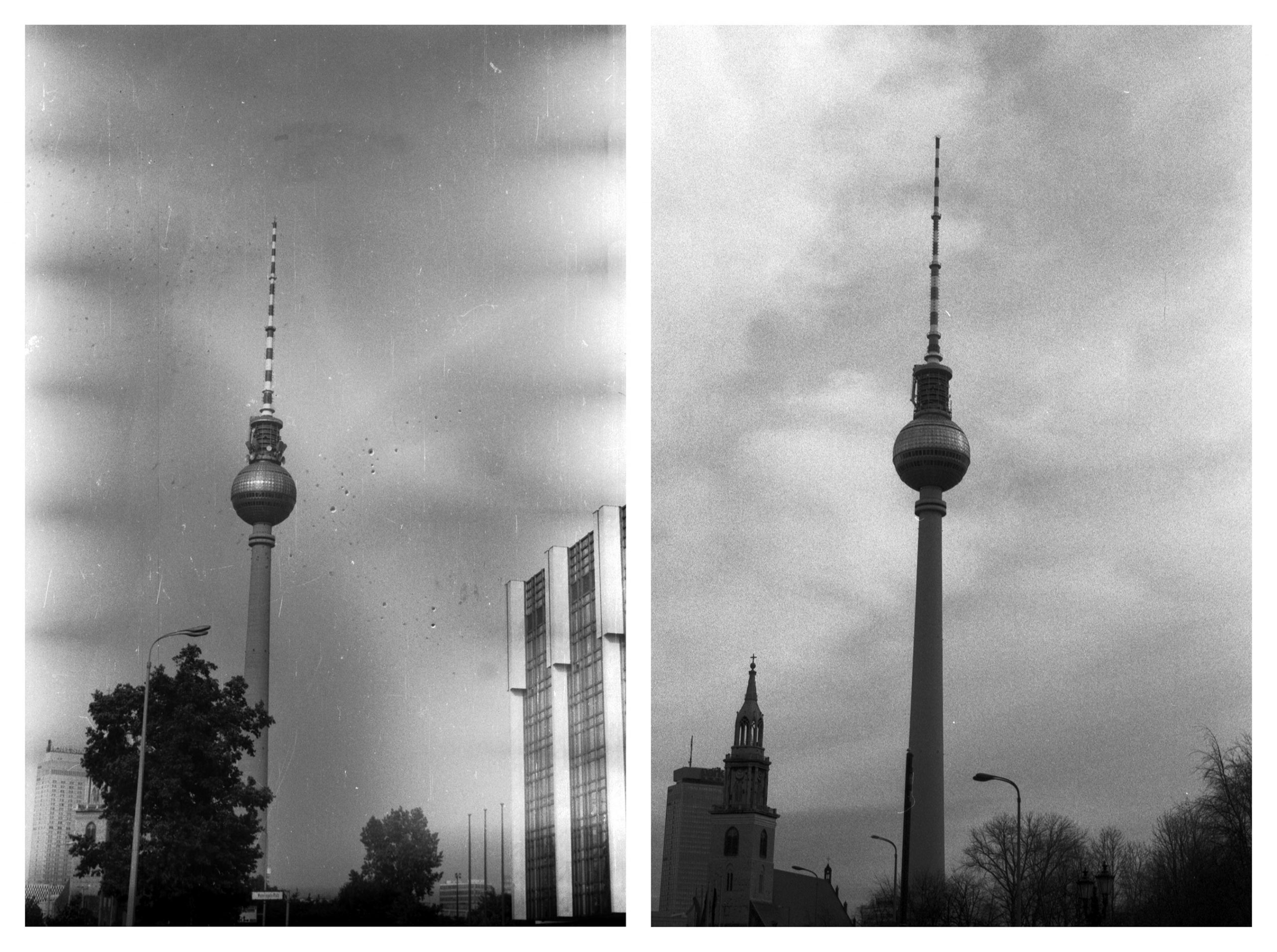 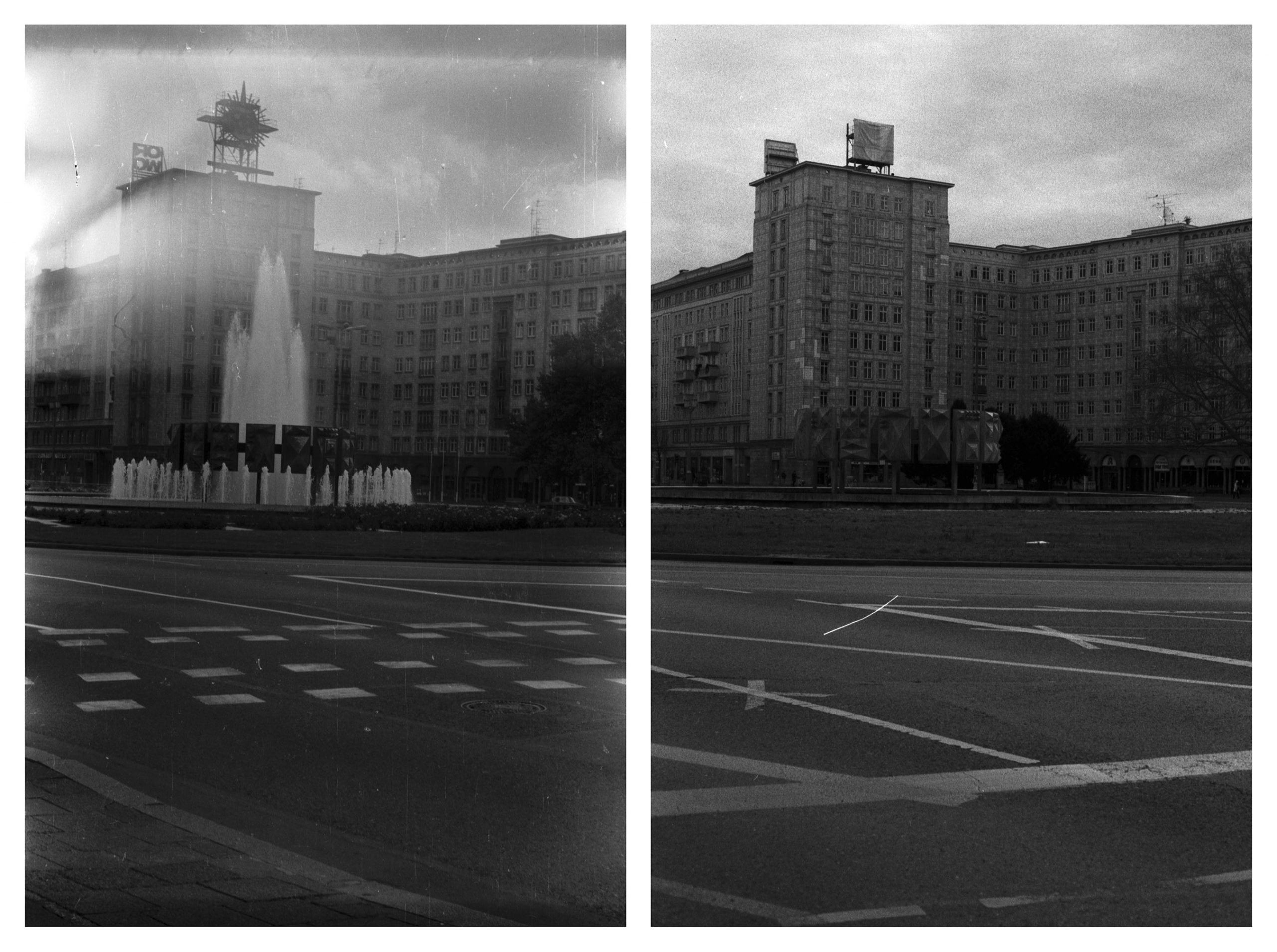 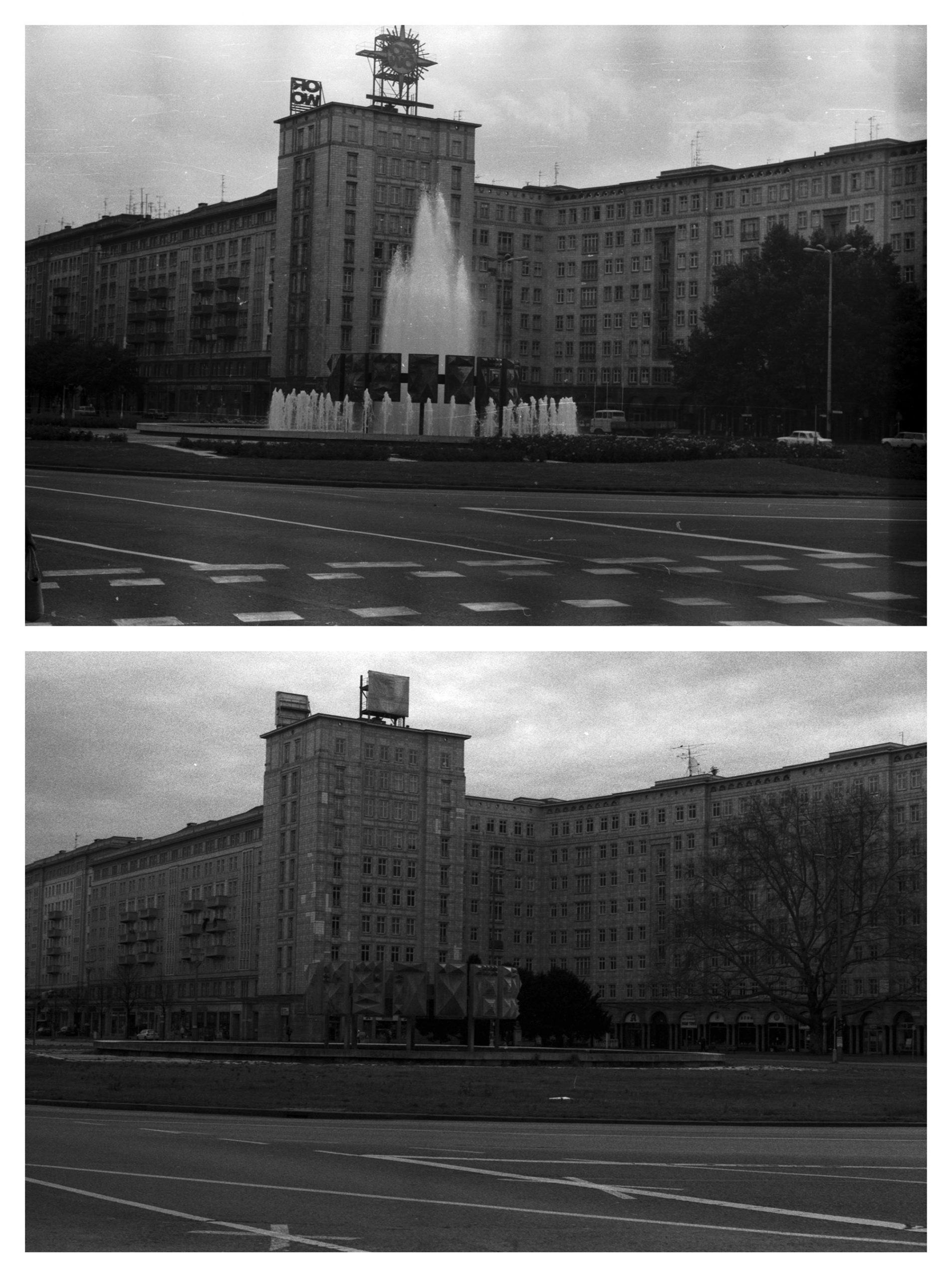 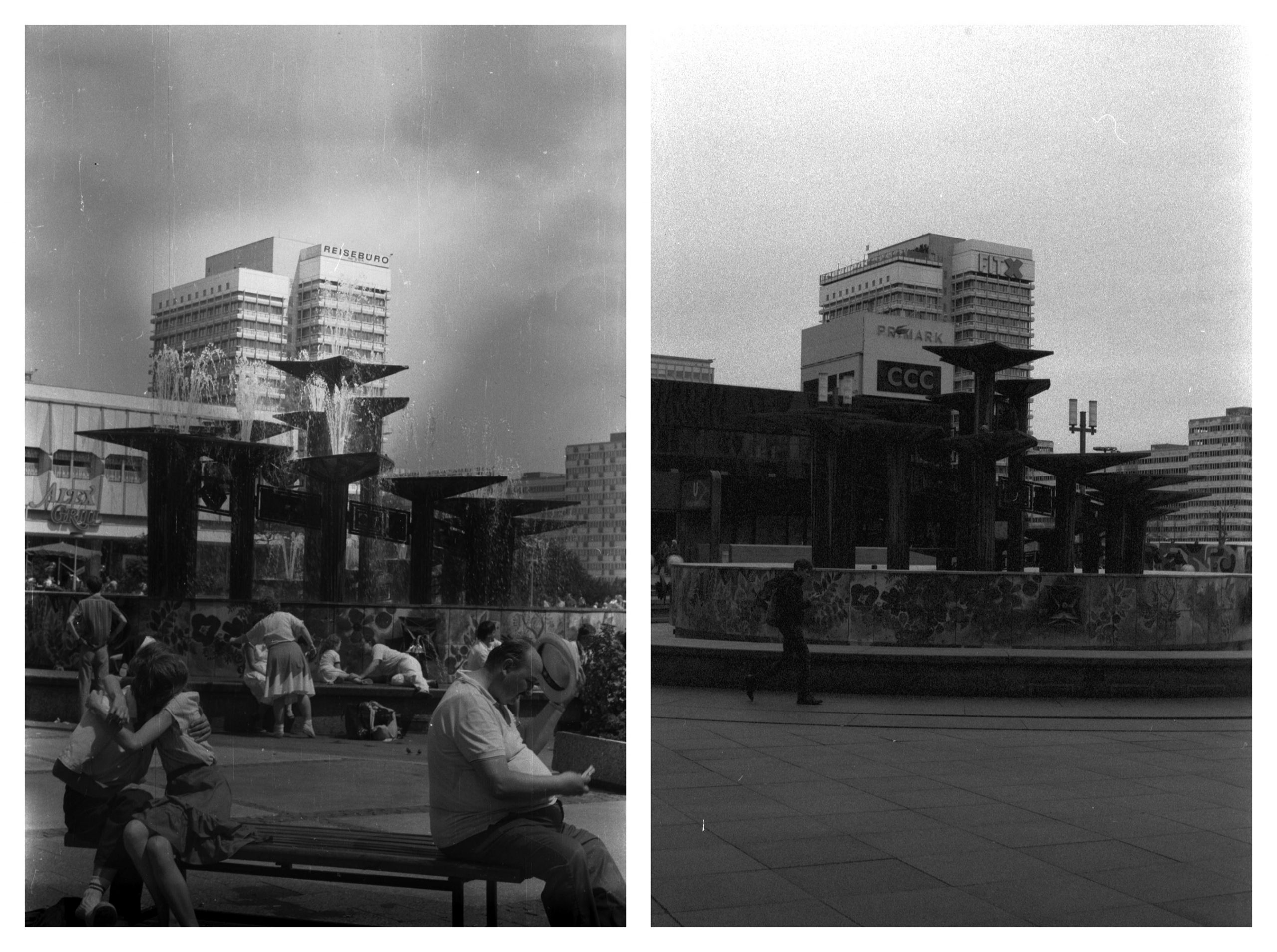 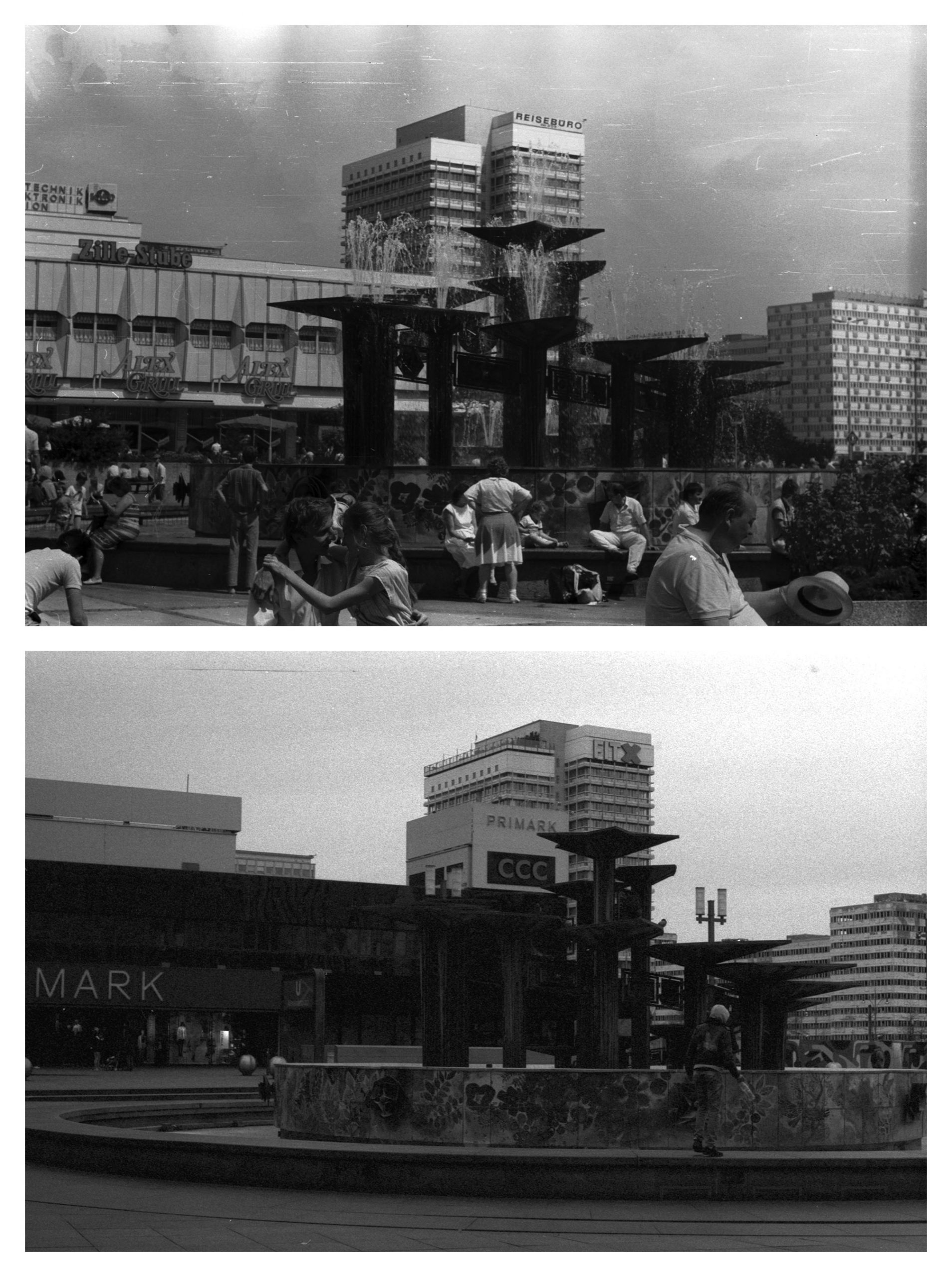 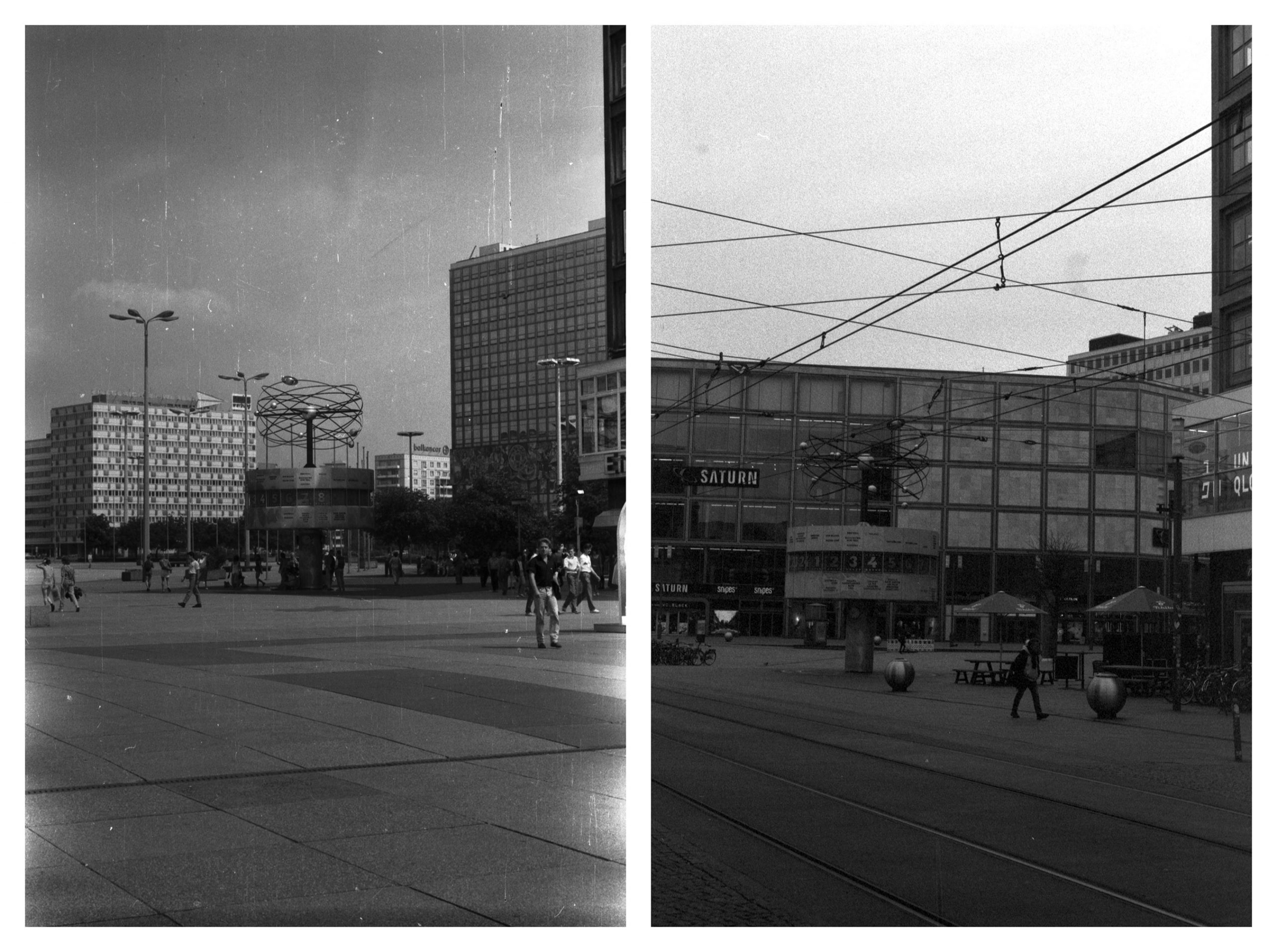 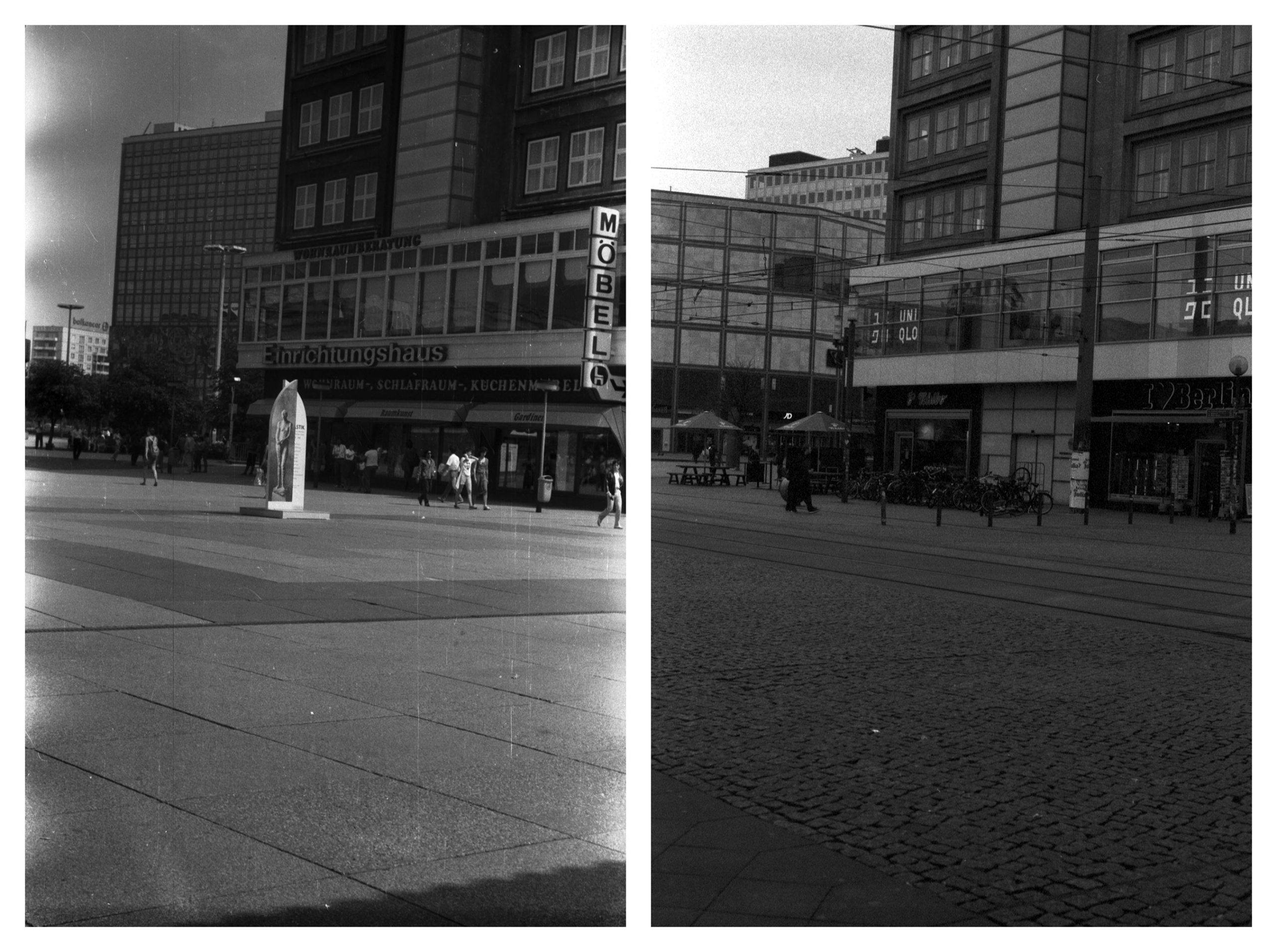