Text and Images by Nikolay Bratovanov © 2021

I guess it is not surprising at all (at least to myself) that the next portion of photography series, which I’d like to share, is once again based on film. There seems to be something quite charming and captivating about this old-fashioned way of shooting that I have been recently inspired by. And this is particularly true when it comes to using an expired film. No matter if it’s black & white or color, there’s always this characteristic mixed feeling of excitement, anxiety and anticipation – from getting/finding the film itself, to the processes of loading, shooting, developing and scanning. If you are careful (and lucky) enough to get properly exposed negatives at the end, there is a great chance that you’ll be completely fascinated by the final results, often marked by interesting flares, shifted colors, organic-shaped structures, deteriorated spots, and other unique analogue effects.

This story began in the autumn of 2020, while I was exploring an abandoned industrial building from Bulgaria’s socialist past, together with my cousin Manol Z. Manolov. In addition to all the interesting scenes there, we were granted the chance to find four ORWO NC-19 120mm rolls (in a near-perfect condition that would later turn out to be rather misleading). And even though I already had some experience with shooting expired 35mm films (Konica VX-100, ORWO NP22, etc.), it was the first time to come across expired medium-format ones, so it’s unnecessary to mention how excited I was about this unexpected discovery of ours.

Dated as far back as 1980, it was reasonable to assume that the fate of the newly-found rolls was far from certain. Still, lured by their brand-new appearance, I was more than optimistic about the outcome, hence only two major issues seemed to be important to me at this point – where was I about to shoot the Deutsche Demokratische Republic-made color films, and more importantly – how was I supposed to develop them? While I had the answer to the first question almost immediately in my head (at least for some of the rolls), it took some time to figure out the second one. However, after researching the topic in details, I found out that this type of outdated film required a specific darkroom chemistry and corresponding process (C-5168) in order to be properly developed. The problem was that the chemistry in question was kind of difficult to find due to the fact that it’s not being officially manufactured anymore – not a surprise, considering that the country of origin itself was already not existing either… Luckily, I came into contact with Vesselin – a fellow photographer who turned out to have some experience with exactly the same setup – ORWO NC-19 (120mm) and C-5168 process. He had even published an article (describing all the details), which I found particularly interesting and useful. In addition, Vesselin connected me with a person who could actually supply me with all the C-5168-related chemicals. So, a couple of weeks after the film discovery, I was more than ready for the forthcoming ORWO NC-19 shootouts.

I won’t hide that, despite the excitement, it took me several months to have all four ORWO NC-19 rolls finally exposed (preoccupation, I guess…). Nevertheless, considering all the shootouts successful and quite promising (especially one in particular), I could barely wait for the developing procedure to begin. And this was the moment that I felt the biggest disappointment in my film photography career – the precious NC-19 rolls simply didn’t show any signs of life! The reason..? Well, it could be anything, of course (not to forget that these were close to 40-year-old color films, contemporaries of the Cold War, found inside an abandoned factory). Yet I also felt partially responsible for having the films coming blank out of the developing tank because of the ignorance of a very basic rule while shooting an expired roll – increasing the exposure time. This is a completely logical (and rather mandatory) precaution that compensates for the reduced film sensitivity due to the passage of time. In other words, if the original film sensitivity was ranked as ISO 64 (as is the case with the ORWO NC-19), you must expose it as ISO 32, 16 or even less, depending on the expiry date, in order to end up with decently exposed negatives. Blinded by the mint condition of the discovered rolls, however, I naively considered such an adjustment unnecessary, as if I was living in the 1980s or if the rolls were magically stored inside a refrigerator for the last couple of decades… And it was once again Vesselin who helped me, this time with overcoming the disappointment, by kindly offering two of his remaining ORWO NC-19 rolls (that were most likely ‘functional’) . Having my lesson already learnt, my ambition now was to wait for the right conditions to come over (snowy and sunny morning) and try ‘reproducing’ one of the failed ORWO NC-19 shootouts, which I had initially referred to as “Lost Playground”.

The idea behind “Lost Playground” has been around for years. Likewise many people in Bulgaria, I’ve been living in a neighborhood, which hasn’t change much (if at all) for the last couple of decades. In fact, the sad truth is that almost everything around – buildings, roads, sidewalks, pathways, etc. – has actually been deteriorating ever since it was built. The great number of playgrounds that were constructed in the vicinity of essentially every building back in the days make no exception either. Being far from pleased with this absolutely unacceptable negligence on the part of the government (which at the same time plans, spends and, most importantly, embezzles millions from suspicious, often unnecessary and poorly executed reconstruction projects), what is left for me as an artist but to get inspired by those barely used, overgrown and almost completely forgotten climbing frames, and include them into some of my photography work. The funny part is that even though I’ve had years to capture the mentioned playgrounds (under all possible lighting and meteorological conditions), I never did. It’s seems like I’ve been subconsciously waiting for the “proper way” of documenting and reproducing this distinct feeling of decay and desolation that embraces the observer once they encounter those almost Pripyat-looking scenes. And with their potentially atmospheric, nostalgic and even apocalyptic look, the accidently-found expired ORWO NC-19 rolls seemed to have been just the right medium to do so!

A couple of days after my second “Lost Playground” shootout took place, it was about time to enter the darkroom. A little bit nervous, quite determined however, I was strictly observing all the temperatures and durations, making sure that not even a tiny mistake was to be made. One of the most difficult decisions, which took me a while to figure out was determining the developing time. It was an equation with so many unknowns – what was the condition of this particular NC-19 roll, was the roll properly exposed, what was the degree of exhaustion of the C-5168 chemicals (due to the several unsuccessful developing attempts), etc…? Well, it was quite clear that in addition to all the available information and advice, I had to rely on my intuition as well. But hey, this was part of the charm of shooting expired rolls, wasn’t it..? 🙂 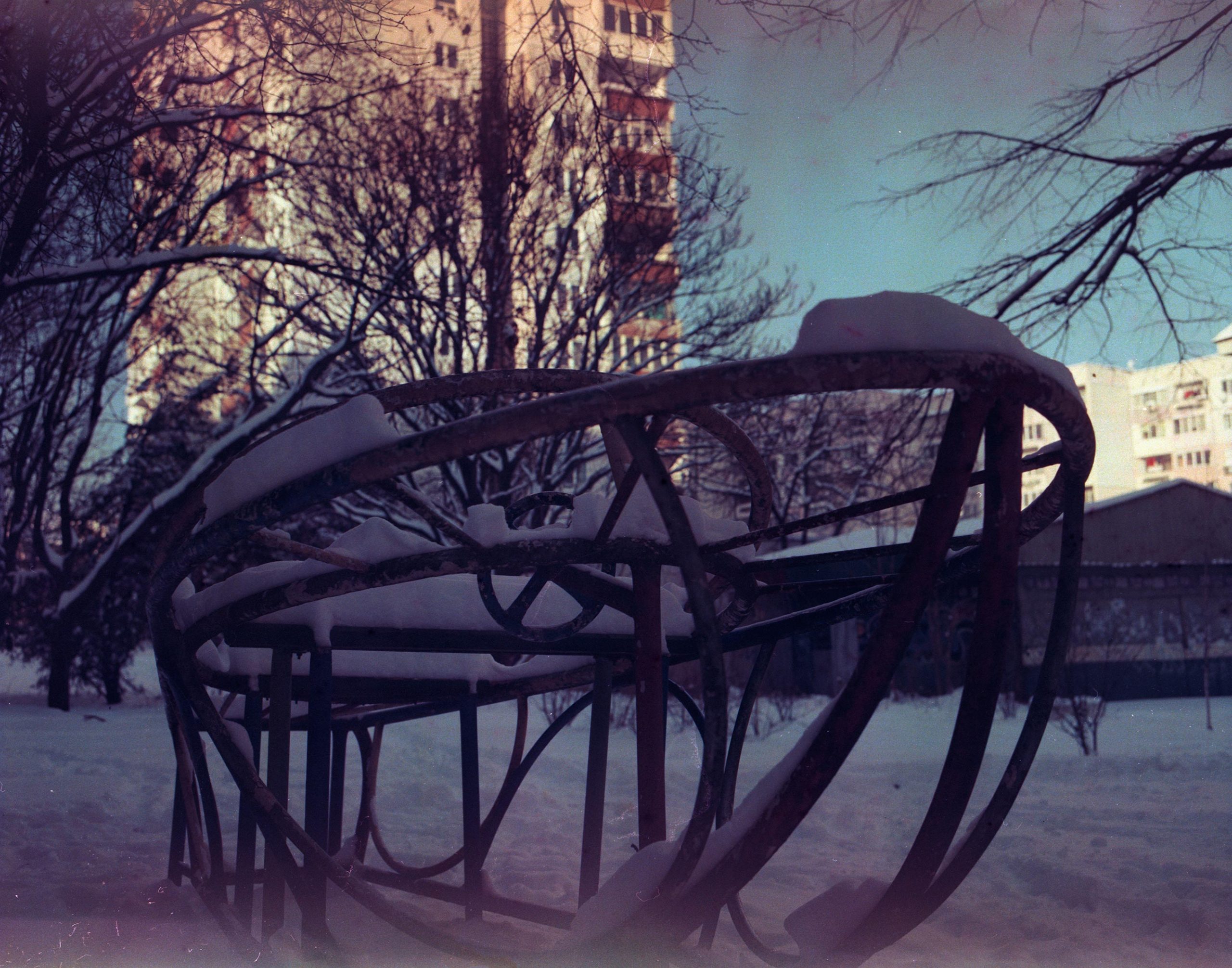 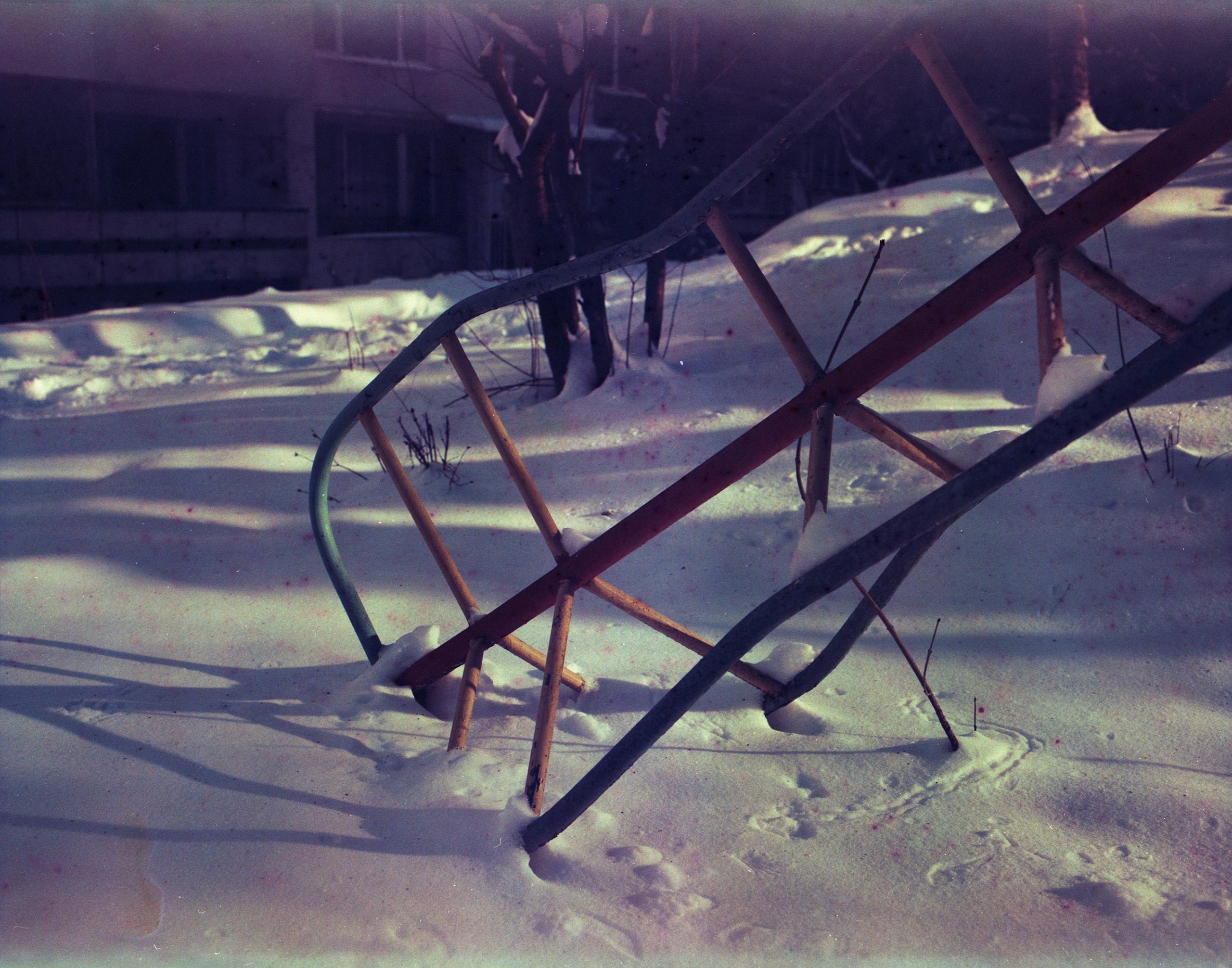 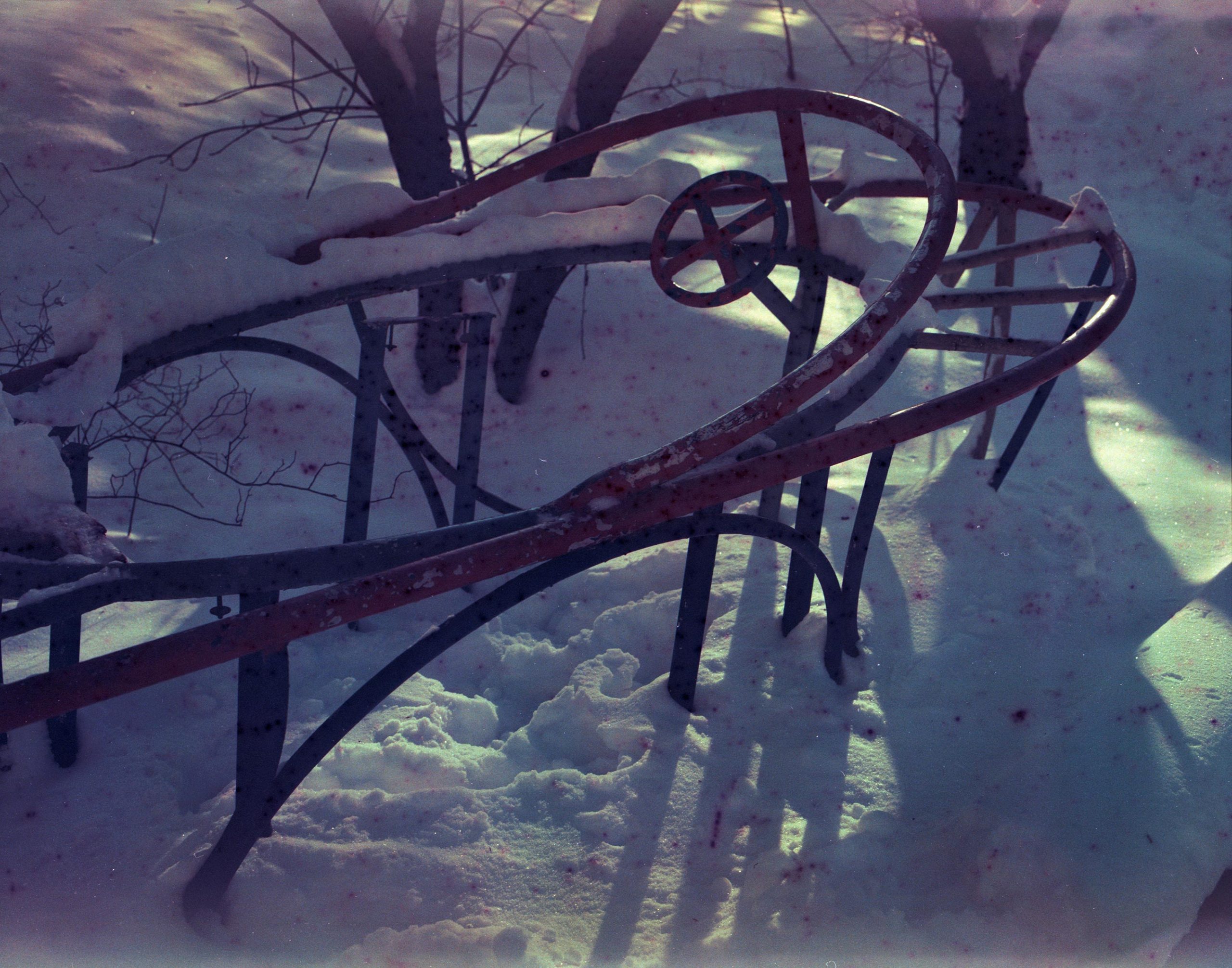 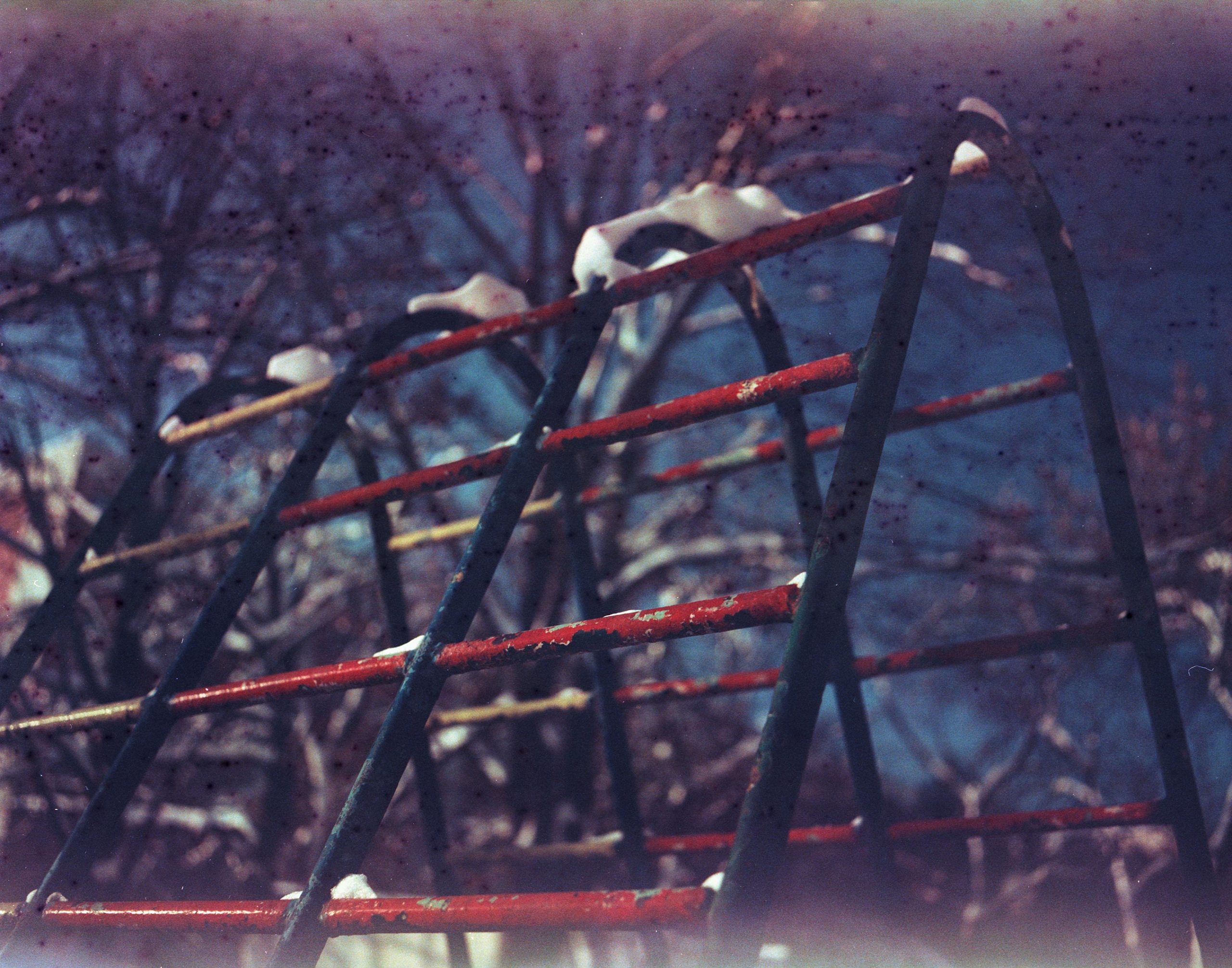 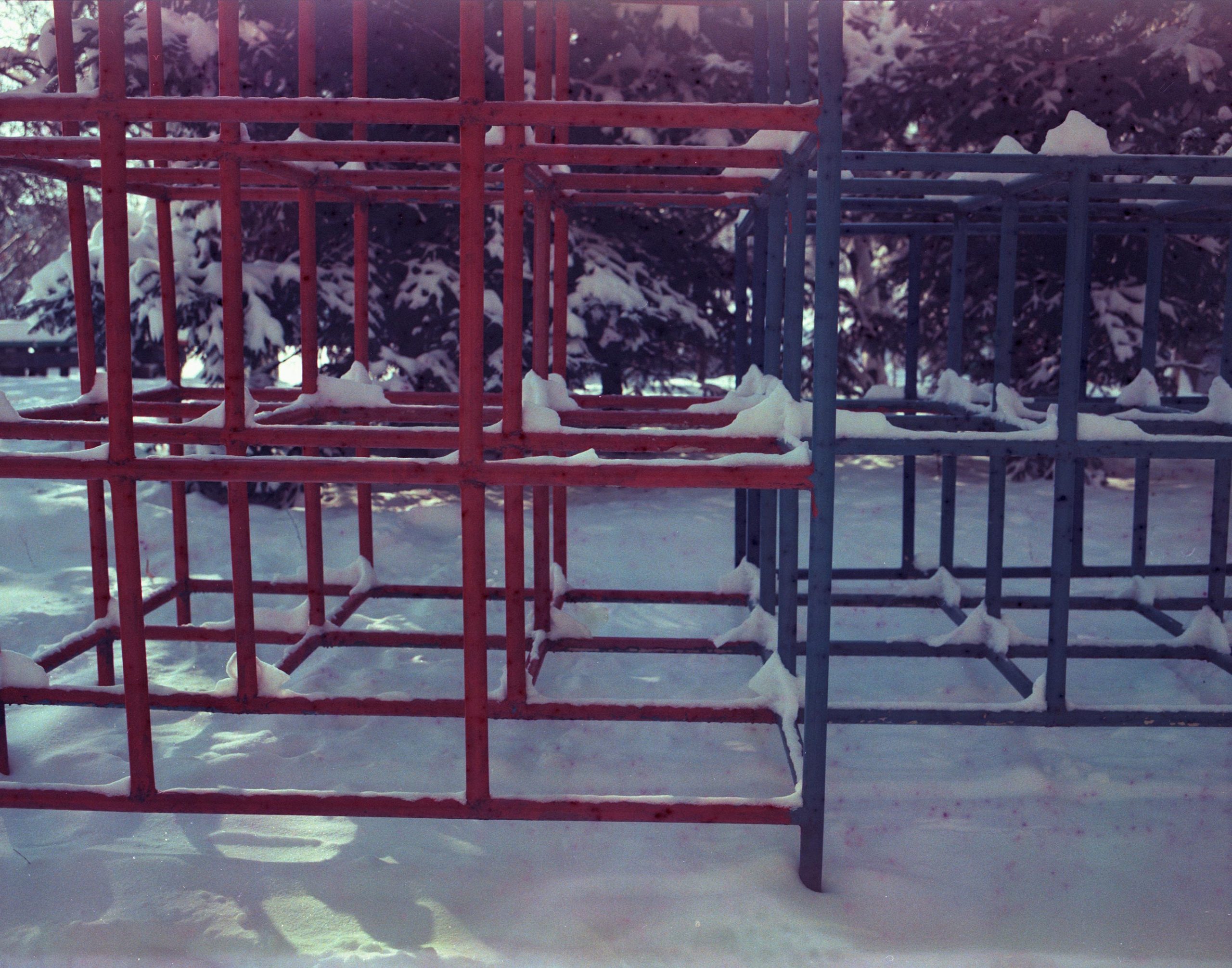 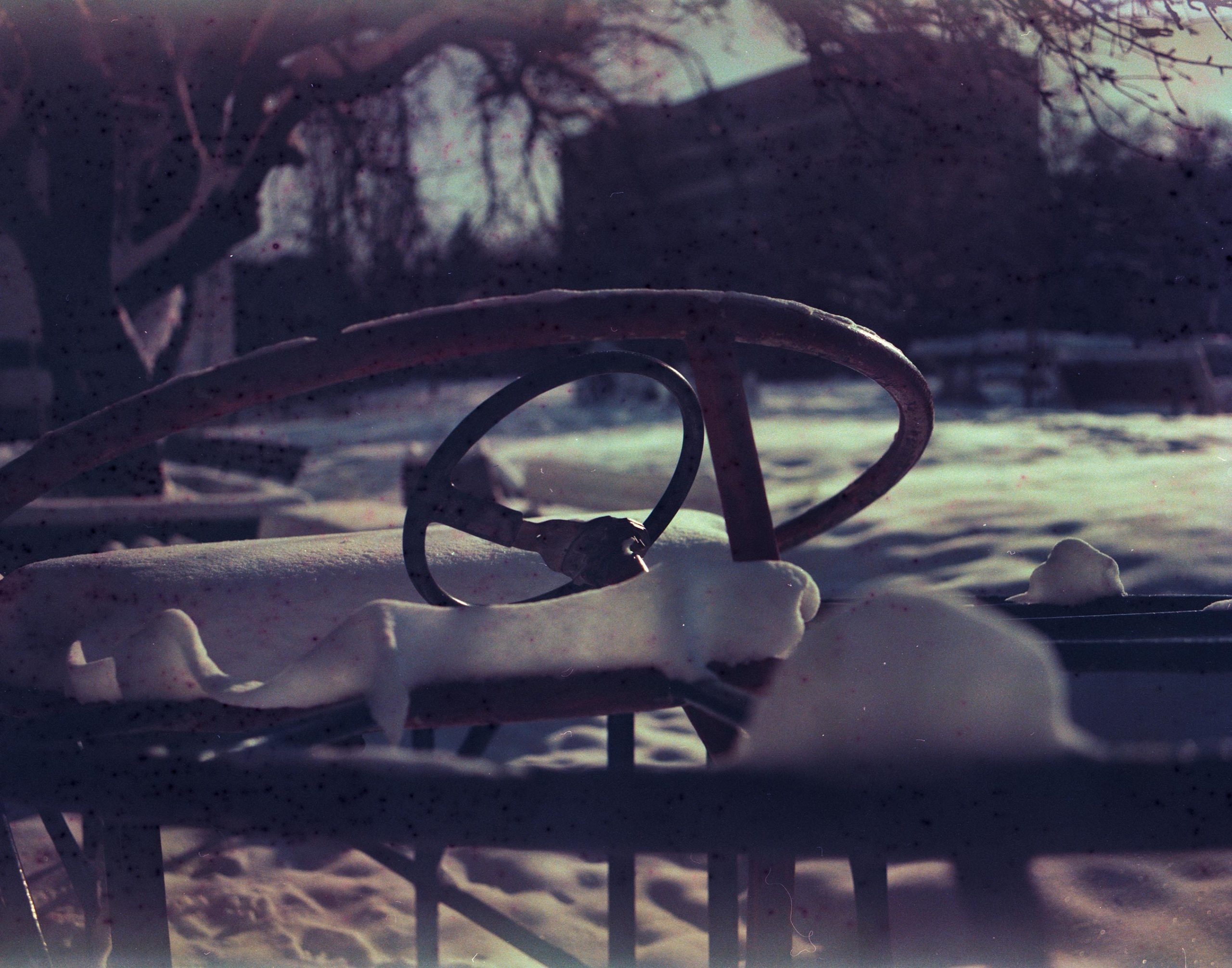 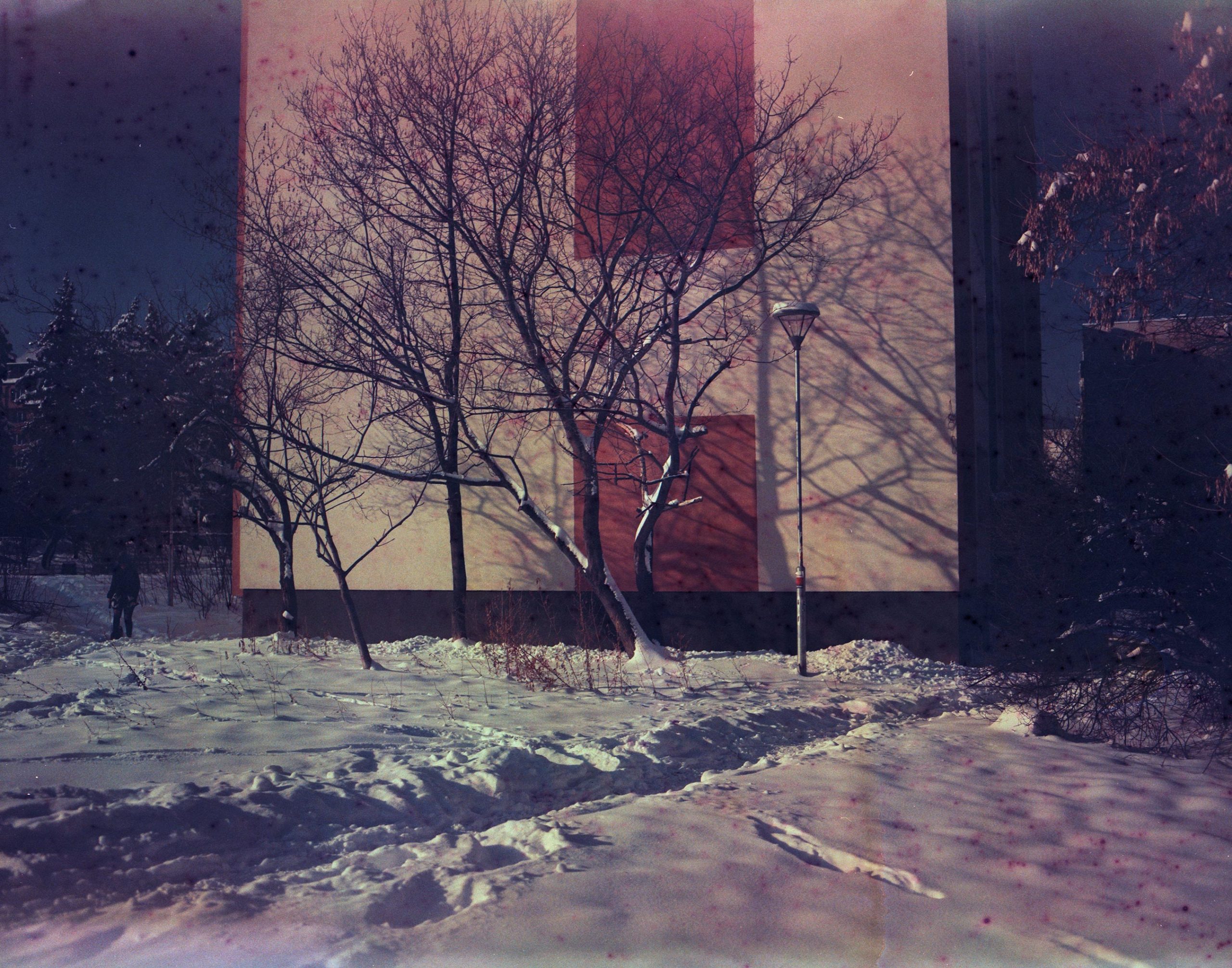 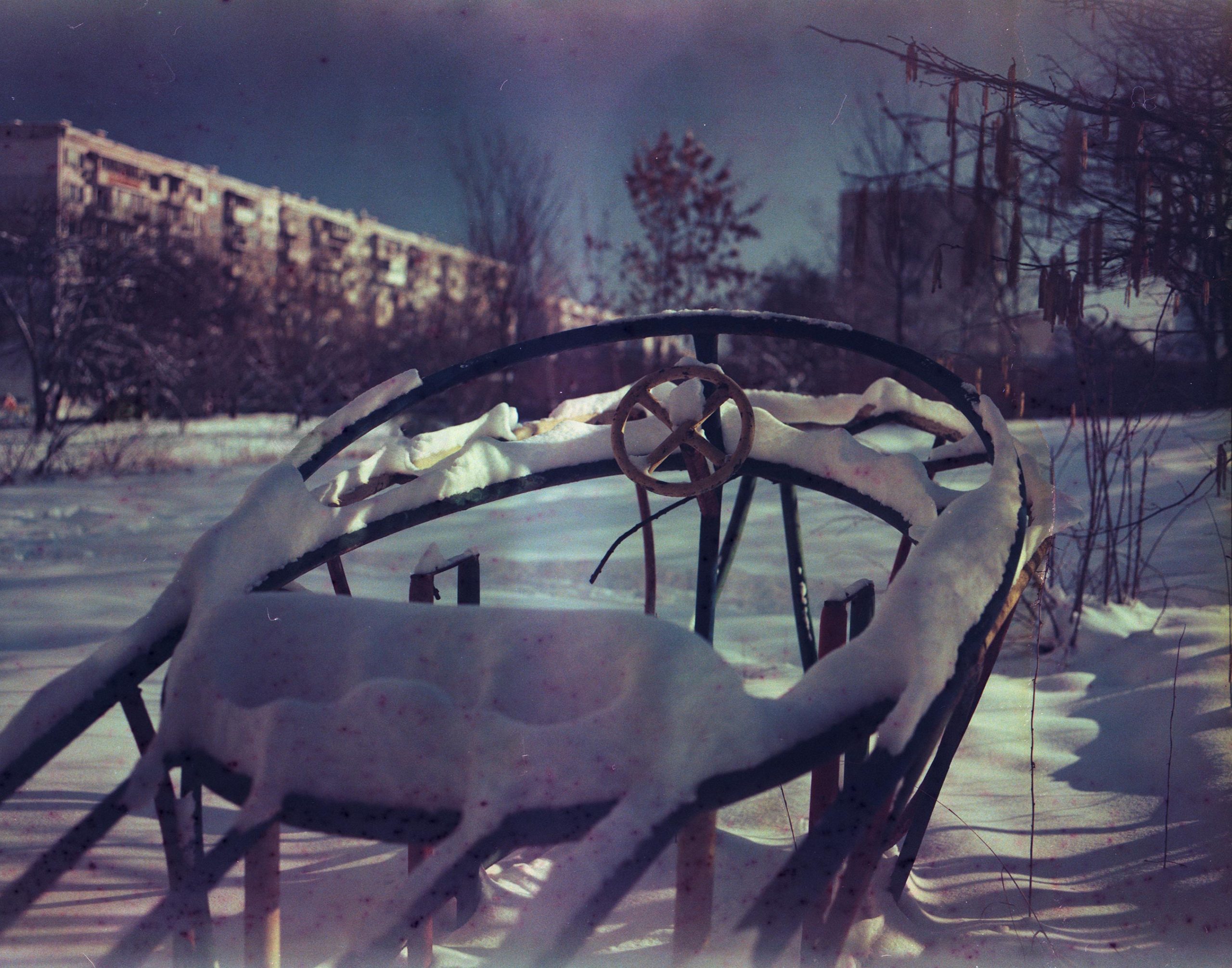 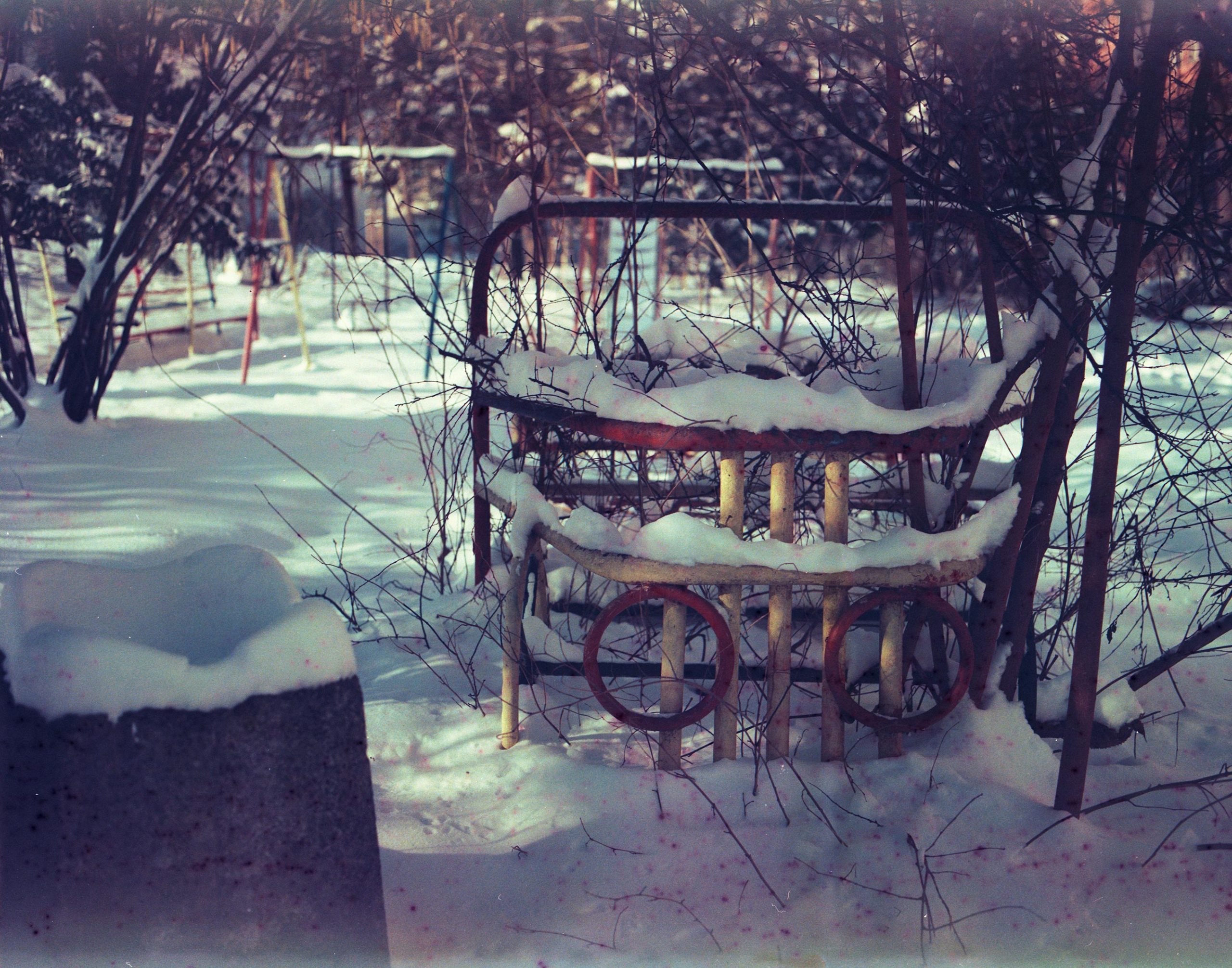 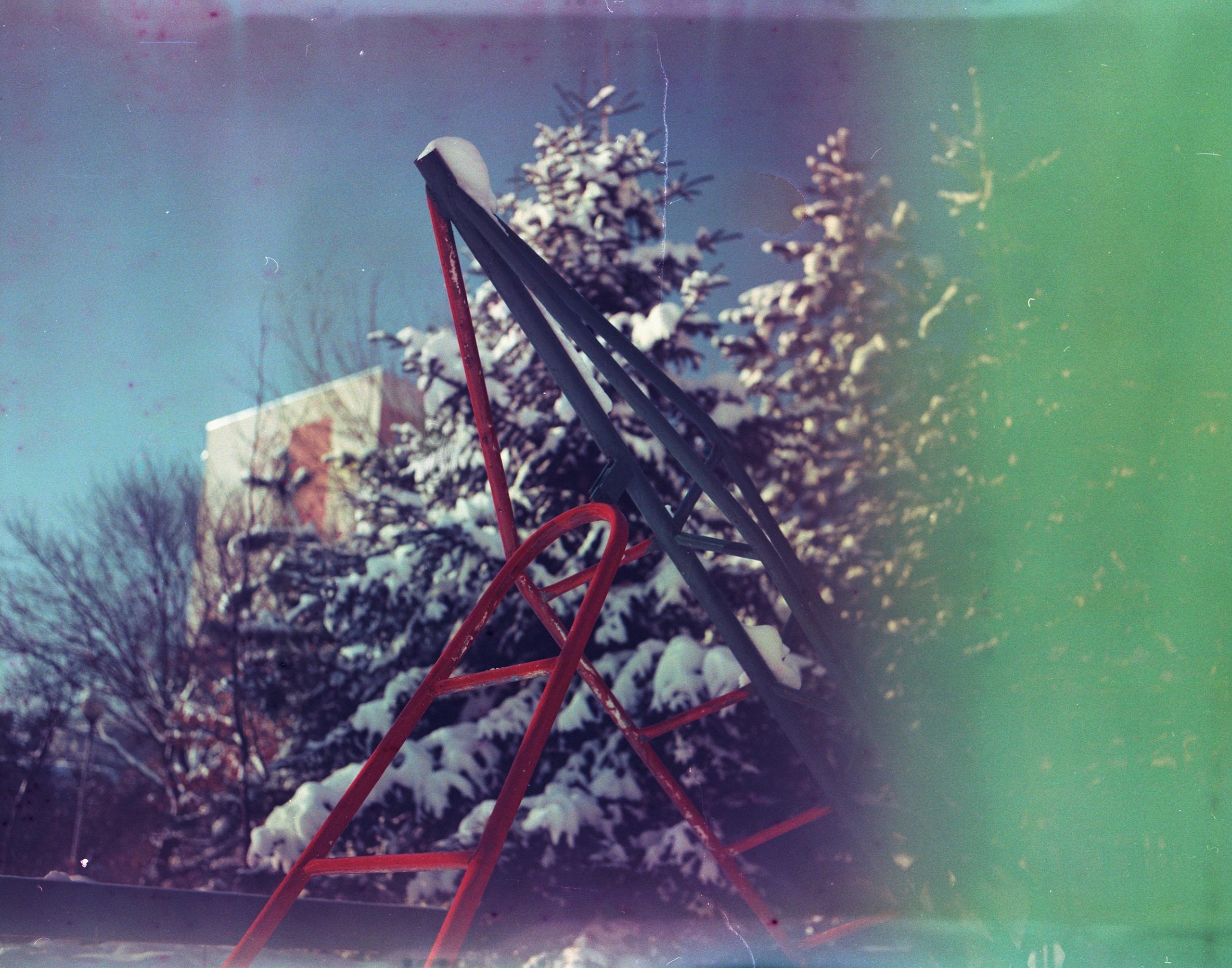